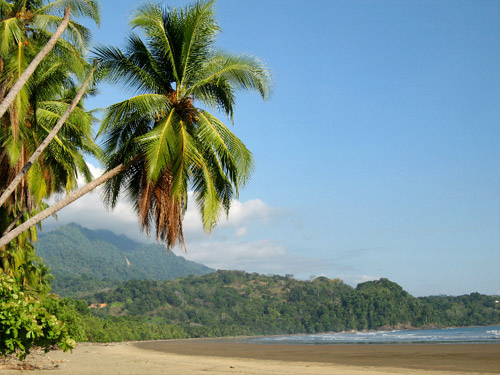 When the Love Vendor began talking about catching carnal coconuts in Costa Rica, Arthur Barnes decided that he would reactivate his long dormant Soul Insertion practice.

As the one and only scholar of all matters international who that evening attended the Love Vendor’s reading, Arthur Barnes understood that Costa Rica was just another tourist colony conquered by corporate imperialists from the USA. Still, he listened to Mr. Love spouting over-sweetened poetry about traveling there to meet up with his past life and that of his current object of extreme affection.

“How could it be?” the poet intoned in a voice trained to convey sincerity, self-depreciation and sacrifice for sake of dedication to the greater cause of all that is Good. “How could it be that we both like cashews and kalamata olives?” he begged his Partner in Sexual Poetics for an obvious, odious and self-serving answer.

“Could it be that we were . . . yes I wonder, as I stare into the fluorescent-lit heavens of this amphitheater occupied by my slavering fans . . . could it be that I, Leonard Lucrativo — acolyte of silk-robed gurus born somewhere in the Himalayas, Capitalist Consultant to the Humble, Bearded Candy Man to Lonely Hearts — could it be that you and I and we knew each other way back when, back then, on a different planet that resembled a Costa Rican Coconut? And were we meant to meet again and create a counseling corporation of our own?”

Arthur Barnes tried as best he could to take a mental break from The Love Vendor’s melodramatic performance. Rather than seem impolite by rising up from his seat and leaving the room, he backed away and crawled deep inside his memory vault.

Back to the sunny day in September 1956 when he first became aware of the special gift that the cushion of his mother’s womb had afforded him. On that Monday morning, Arthur was sitting at his desk in Mrs. Ambruster’s first-grade classroom, watching Ronnie Lee’s cheeks flush and fill with bloody anger because he couldn’t manage to draw Mr. Sunshine without breaking his fat, yellow crayon and shredding the sheet of manila paper. Arthur didn’t mean to intrude on Ronnie’s temper tantrum, much less to insert himself into Ronnie’s soul. But at that time Arthur didn’t understand that the act of staring into another person’s eyes was, for him, tantamount to opening a spiritual door.

And Ronnie Lee’s eyes were red and teary. And Arthur Barnes wanted to comprehend the source of so much frustration. And so he looked into Ronnie’s eyes and quick found himself behind them, trapped and blinded by a flood of rage and violent impulse.

Meanwhile, Arthur’s young body acted of its own accord, rose up and kicked away its chair, and ran from the classroom. Which act diverted everyone’s attention away from Ronnie’s tantrum. Mrs. Ambruster chased Arthur’s body all the way down to the end of the corridor that led straight to the principal’s office, inside of which Mrs. Pierpont waited to scold the corporeal presence she assumed was Arthur Barnes. Arthur’s body was sent home and spanked for its crime.

But that night — as he lay in bed wondering about the scientific principle behind the fact that the cold plaster wall felt so good against his hot hiney’s cheeks — Arthur realized that he owned a super power, a talent that could save others from suffering grief. After all and in the end, as a result of Arthur’s sacrifice — no matter how much unintended — Arthur’s hide was tanned and Ronnie Lee got off scot-free for throwing a fit over something as inconsequential as an imperfectly rendered drawing of Mr. Sunshine.

Arthur Barnes named his gift Soul Insertion, because he remembered Sister Jacqueline explaining the nature of souls and such in Catechism class, and he thought that getting behind someone else’s eyes felt sort of like bumping soul shoulders.

Leonard Lucrativo, aka The Love Vendor, owned suspicious eyes that tempted Arthur Barnes to slink inside. Slip, slop, slide and slurp. Oily was the journey, and dirty was the destination.

Because behind the poet’s darting pupils Arthur discovered a devious mind and an even more soiled soul than he might have imagined were the case had he remained no more than a member of the mad magician’s fawning audience.

A successful Capitalist Entrepreneur was no more a sinner than a poor man who lacks the intelligence, ambition and sense of determination required to become rich. This much Arthur understood. But a dark deceiver and a traveled trickster who would take advantage of confused individuals, in the studied opinion of Arthur Barnes, was a criminal to be reviled.

Arthur smelled the odor of deception as soon as he entered the bearded poet’s soul. Much like the stink of a rural Sunoco Service Station’s windowless restroom, the rusty prison cells of Lucrativo’s cranial chambers left a soul searcher’s lungs filled to capacity with methane gas and uric acid. Simply put, the man’s conscience had rotted to such a point that God’s personal surgeon might have refused with good cause to operate.

Arthur was, of course, appalled by what he discovered. Once privy to the sins that lived within the Love Vendor’s eyes, he followed one tunneled pathway after another on what turned out to be a hopeless quest for Costa Rica. No Love Coconuts here. No carnal cashews either. And not one kalamata olive to be found.

Just one long, high-ceilinged, narrow room. Night-black air, except for the dim light shed by a few flickering candles positioned at regular intervals along the castle walls. A threadbare narrow carpet that puffed ash with each of Arthur’s self-imagined footsteps led to a stone altar, empty but for one leather-bound volume inscribed on its front cover with a flourish of gold lettering.

As Arthur’s inward sense of sight approached the altar, and then rounded it so as to see the book straight up and forward facing, his soulful heart picked up a sudden and insistent jungle drumbeat that shook the upper atmosphere of this ersatz incarnation of Carnal Costa Rica.

Next, a spire of flame rose up from deep inside the book. And within that fire appeared the wraith-like image of a winged and bearded poet, hands clasped as if in prayer, eyes wide open and spinning wild inside their sockets.

And at the last the trembling echo of La Voz de La Love Vendor bellowed forth the title of the tome before him: If Coconut Love Be Near At Hand, Can Wealth Be Far Away?

Arthur might have granted The Love Vendor the benefit of doubt suggested by the possible definitions of the word “wealth,” had it not been for the poet’s hollow, tumbling roll of laughter. That and the sneer upon the man’s upper lip convinced Arthur Barnes never again to visit Costa Rica, or to try catching coconuts while eating cashews and kalamata olives.