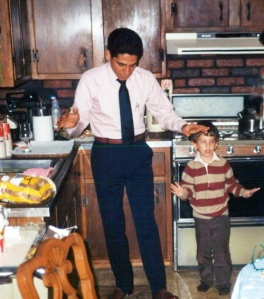 A young man’s dreams look forward to what he imagines might become his future. He creates scenarios with equal energy and effort while he’s awake and while he sleeps. His dreams are malleable and oftentimes buoyed by a joyful sensation. His imagination knows nothing about death.

An old man’s dreams become the cherished memories of his earlier faith in infinity and eternity, a faith he lost in gradual fashion, as the wind tore off one flower at a time from his face, then bent his stem toward the soil that once fed him, and near the end began to insist that his roots must be ripped away from planet Earth.

Oblivion seems a sad place, and so we invoke fairy tales that describe an afterlife. A giant’s castle inside a cloud, atop a beanstalk. The giant falls, as fell Lucifer.

I am that old man now. I own neither future nor faith. My face no longer blooms with color and fragrance. The weight of life bends me forward; my gait is slow and hesitant. My roots begin to loosen their grip. Today I rage, along with Dylan, against the dying light. Yet, I wonder if I’ll go gentle or go gutted by a struggle against the pain of disappointment. Those who say we must surrender are hopeful fools. The truth is that we are surrendered.

I was once that young man charged with boundless dreams, most of which — as survival demands — had to be perforce abandoned. So many pleasant scripts, now no more than yellowed pages littering the archives inside my mind.

One such vision I created placed me center stage, dancing.

I owned a gift, a talent, and a flair for floating across a dance floor.

On the afternoon of Friday, July 6, 1979, I snatched my carry-on luggage from the compartment above the seat I’d occupied for six hours, walked through a snaking canvas tunnel, and met two friends inside the airport lobby.

I’d purchased a one-way ticket from Philly to LA.

My friends entertained me for a couple of hours, then drove me to the apartment where I’d sleep for the next two months, while the signed tenant traveled through parts of Europe.

I was born beside the Atlantic Ocean. I grew up with the aromas of salt and sand embedded in my nostrils. The air of land’s end filled my lungs with nourishment more important than oxygen.

So on that Friday evening, I unpacked my suitcase, found a clever place to hide most of the seven hundred dollars I owned, showered, and dressed my body in what I imagined to be LA Chic. (My polyester Guido outfit failed the laid-back LA test, but no matter.)

Splashed with an abundant amount of Polo cologne, as all East Coast Guidos are bound by unspoken oath to splash, not dab, I ran from the apartment, followed the street-sign arrow that pointed west, and walked a few miles until I reached the grand Pacific.

That night, tangerine sunset sky enriched with smog, I tapped the nearest shoulder and asked, “Where around here do people go when they feel like dancing?” In order to be understood I had to repeat my question several times. I spoke East Coast Rapid in nasal tones acquired in New Jersey.

I found the dancehall. I paid the cover charge. As was my habit back then, first I sat and watched. I searched for the best female dancer, one with whom I knew I could fly.

And yes, I flew. I twirled and I curled. I sensed and followed both the prominent and the offbeat rhythm. I lost myself in meditation, the only kind of meditation that I ever could accomplish. Today I wonder how many Buddhists know how to dance.

And yes again, the crowd backed away, formed a circle around us, cheered us on and clapped out the joy we shared.

The old man I am today dances only when he closes his eyes and entertains his memories. His legs lost their onetime flexibility. The stem leans, and the roots ache.

And yes one more time, this old man feels blue when he considers the fact that back then he lacked the confidence to pursue his dancing dream.