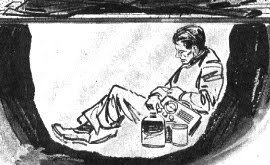 I suppose you might say that I’m back and I’m shaken. My brother John’s funeral service in a lush city by the sea proved itself a cauldron of turmoil. I suffered sleepless nights as I sat in a motel room’s excuse for an easy chair, and tried to read, to think, to remember, to hold back tears that needed to be shed.

A suit and tie, jacket pressed and double-breasted, still fit me snug, Italian, my body old inside of it, and older yet for the sadness that dwelt deeper still. For a few minutes I stood behind the lectern, knees shivering behind the wooden shield, elbows propped so as to fool the congregation into believing that I felt brave enough not to cry. They were not fooled; of that I’m certain. Nor was I.

The program featured a photograph of a John who roamed the planet twenty years ago, still young enough to smile, still free enough from pain to see a hopeful future. I held this booklet and stared into his eyes, knowing that never again would he watch me try to understand him.

I folded hands with my sister-in-law, because I thought I should. We of  this digital world hold images of what’s expected, reflected from television screens, computer monitors and the mirrors we’ve implanted in our minds. Reality? Who knows her anymore?

The after-service meal. This strange custom I’ve always considered bizarre. Not the gathering and conversation as such, but the idea of poking food into our mouths just to remind ourselves that we are not so dead as the person to whom we recently whispered prayers and forever farewells.

Family and friends attended, some from three thousand miles away. Red eyes shot through with fever caught inside an airplane. Good, well-meaning folks. People filled with love for John and a deep desire to let him know what he can no longer comprehend.

Privately I wished for some religion to inhabit my soul, for the ultimate suspension of disbelief. None came to visit me. Instead, my cold heart waged its never-ending battle with my silent weeping.

After the funeral and the feast we were invited back to John’s house, but I could take no more. My head ached. My legs swelled and my joints creaked. Sweat threatened to suffocate me. So I offered my polite goodbyes and headed back toward the cheap motel.

Inside the nondescript room I shed the necktie and the Italian jacket, pulled on whatever came to hand from my suitcase and left again to walk a mile or so to a dirty convenience store. There I bought a few packets of junky food that I swallowed and failed to taste. Then I walked the unfamiliar streets in circles, cussing and cursing and mumbling foolish rage as a weak form of defense against the rapid beat of my tired heart.

Next morning came the most difficult part of the journey: saying so long to John’s wife, knowing all too well the wrenching grief that would shake her to the bone once all of us had gone.

Back here at home I wait until I am alone, and then I sing the songs that John and I sang together throughout the years. I recall the twists and turns, the useless and yet unavoidable complications that haunt two brothers who were (are?) so much alike.

I sometimes feel as if I am about to lose my sense of balance as I attempt to understand the insistent urge that tells me to move forward, that reminds me that I am yet alive. Am I selfish? I suppose so. Life will have me no other way.

I read in stuttered pattern, with the frequent and unwanted intrusions of memories. Christopher Buckley’s book about losing his mother and father inside the space of a year. Scott Turow’s breakthrough courtroom novel (this one I read for the third time; did I read it again yesterday simply because John was a lawyer?). Evelyn Waugh’s short stories in order to make contact with the mental side of myself.

Frank Shaver sits inside a prison cell, muttering about a murder he claims he did not commit. His shrink, Dr. Charles Gettick, prepares to leave his center-city Philadelphia office building and travel by polished, dark sedan to visit Frank and further analyze him. Is Shaver losing sense of black and white, or is kuhler invading his once comprehensible world?

And here, tonight, I care not a whit whether or not what I write owns grace and glory. Rather, I care only that I return to write. 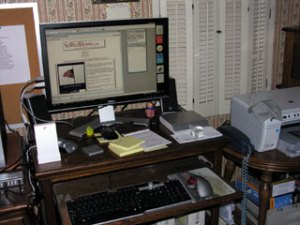