I am a wise and fortunate man. Many years ago, when I moved from a big, ugly city (one of several dusty metropolises I once called home), I decided to live here by the sea. I grew up by the sea, and I’ll likely die by the sea (and if I write “by the sea” one more time, I fear that I’ll break out into song [I am a talented crooner; just ask my fans]).

So each time I run away to a cheap motel room, located within the borders of one version of Paradise, for a bus man’s holiday, I eventually return to my own patch of Paradise (not my own, I realize, but here on Earth government seems to own more influence than man’s ideas of God).

Not only am I wise, fortunate and musical by nature, I am, as well, an organized man who refuses to abide any kind of sloppiness. I am Sicilian, after all, and if you can forgive me my rebellion against Political Correctness, then you’ll accept me at my word when I say that all Sicilian men are dapper, articulate, fastidious and intellectual individuals.

All of which is meant to say that I wasted not a minute upon my arrival home before I unpacked the suitcases, booted up the desktop computer and put myself back to serious work. After I napped, that is.

When I awoke, I thought to get in touch with an old friend. This man, Michael, was my roommate when I was an undergrad at university. After graduation, we lived together in various plaster-patched apartments and wallpapered houses in The Big City. As well, we worked together, forming and joining organizations designed to help the “downtrodden.” Yes, we were Hippies; we wore bluejeans; I ironed mine each morning, because I am a Sicilian and all Sicilians press even their underwear into a state of near-perfection.

Michael stayed in The Big City of his birth. He married and sired four children (help!).

I moved from one location to another, sometimes hitchhiking rides across country (“thumbing,” we named the practice). Those were The Good Old Days, when men were men and women were out to castrate us if we drank too much brew for making love. That was a time when many noble citizens — and some ignoble too — felt safe enough to thumb a ride. I once rode, as a passenger, across the state of Kansas, a pig farmer at the wheel. Four hundred miles later, I knew all there was to know about raising pigs. Four minutes after leaving the farmer’s automobile, I forgot the smell of pigs.

I awoke from my nap and I dialed — no, I tapped — Michael’s numbers into the telephone. It had been perhaps twenty years since last I spoke with him. I suspected that my call would please my old friend. I hoped for excitement at a distance of three thousand miles.

Instead, Michael’s voice sounded flat. Not his fault, I thought at first. After all, he’s not Sicilian, so I can’t expect him to croon.

Still, we had nothing much to say to each other.

“So, how’s our friend Rick these days?” I said.

“Rick? Oh, well, dintja know that he almost went to jail for pederasty? But tell me, whatchew been up to since the last time I tawked witchya?”

Laughter, nothing else. No more questions.

“He seemed happy last time I saw him. But that was maybe ten years ago.”

“And you? How you doin’ now that you’re a busy gubmint official?”

“My hair is still pitch black,” he said.

“Bullshit,” I wanted to say. “You’re an old man like me.” But instead I said “Oh, that’s swell.” When I heard myself utter the word swell, I thought of the pig farmer; I imagined that tales of raising and butchering pigs must sound more interesting by far than this darned telephone conversation.

“Well, we’ll have to stay in touch,” said Michael.

And each of us raced to see who could hang up (disconnect, that is) the telephone first.

I felt winded and, of course, disappointed as I leaned back in my swivel chair.

Then I chuckled. Thomas Wolfe was right after all. Today’s technological innovations may make communication faster, but not closer. 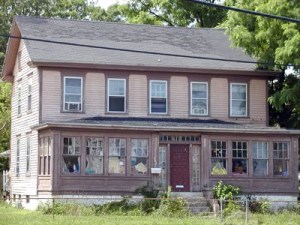 Today I joined a different sort of conversation. A group of us spoke about the notion of Political Correctness. After my participation, I felt disgusted; because the conversation itself was politically correct. I employed the term “politically correct attitudes,” and another person pretended not to understand what I meant to say.

Screw the judges, that’s what I say.

The “Isms” and the “Ists” are attacking themselves. Feminism. Multiculturalism. Educationists. Misogynists.

And then there are the Interior Decorators of Soul. Boy, can they doo-wap a diddy diddy.

I just want to sing. Any lyrics, any melody, any beat that comes to mind.

Did I tell you that I’m Sicilian and I’m proud?

Have I failed to mention that I can croon (all Sicilians can croon; just ask me or the ghost of Perry Como).

I’m So Incorrect When I Sing