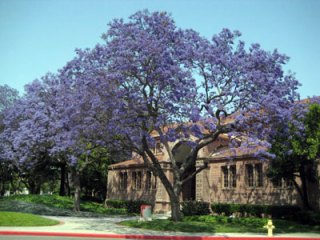 Waking Up To Heaven
This story is Part III of a book I’m writing called “A Slice of Virtue.” It’s all in that messy, first-draft stage right now. Find Part I here. Find Part IV  here.
An Entertainment, Part III
He was already awake, lying listless under cotton sheets that he imagined were silk, and listening to the pacific cluck of mourning doves, when the telephone bell jangled. Whereupon he decided that he had best stop dreaming of words like listless, pacific and whereupon and answer the damned intruder.

“Now that you mention it, the sidewalks surrounding Debra’s beach-town fortress are stained purple these days. But as pretty as these mimosa imitators are, I can’t smell the damned things. Aren’t lavender leaves supposed to spray perfume into the air?”

“Another good mood you’re in, I can tell. Look, my friend, you abandoned Francesca. She’s back east suffering thoughts of next winter’s blizzard winds, while you complain about the jacaranda. Get out of bed, take a shower and meet me at the Club Revere for breakfast in an hour. The house deal came through earlier than I expected, so we’ll have to brace ourselves before I meet the landlord.”

The Club Revere sat seaside, just a few yards away from the white sand. Its audience, especially on a summertime Saturday morning, consisted of both the gifted and the damned. Men dressed in white cotton trousers, linen blouses and leather sandals. Women chattering in high key, at least in the minds of men, as accoutrement to the sport of vapid flirtation.

Jackson leaned in languid pose, back against a fluted pillar just a short distance from the restaurant’s front door.

“Let’s sit on the rear patio this morning. The bottle brush are in full bloom, and there’s shade behind the latticework,” said Jackson.

No one looked up to notice them as they made their way past the outdoor bar and to a corner table. A tucked-away piano man tinkled ivory in the shape of a wandering melody; a metal bucket near the man’s right shoulder held a few loose bills and change.

“Your usual, then?” said Jackson. His smile revealed nicotine-stained teeth and a sarcastic, bent attitude. Trainer oftentimes felt amazed and envious of Jackson Chessman’s ease with luring women to his bed in spite of the man’s apparent lack of good hygiene. Maybe, thought Jon Trainer, hedonism superseded cleanliness where sexual intercourse was concerned.

“If you mean do I want a Ramos Fizz, then yes. But I wouldn’t call the drink my usual, not yet at least.” Jon had never before his arrival on this foreign shore encountered the milk-white drink. He didn’t even like the taste of cream and gin, but the brunch-time cocktail seemed to fit the adventure.

“So. The house. When are we supposed to move in?” said Trainer.

“Relax, my friend. Is it always down to business with you? Look here, enjoy your drink first.”

Jackson ordered what the menu named a spinach souffle. Trainer stayed with ham and eggs, eggs sunny side up and a fresh baguette for dipping.

“This lady, Lydia is it, are you serious about love so soon after leaving love behind?” said Jackson.

“You never did beat around the bottle brush, you evil bastard. It wasn’t love I left, and I’m not asking myself too many questions right now, much less answering yours. So, okay, the Ramos Fizz buzz has me in a mellow mood, and now will you tell me about the house?”

“Douglas will let you live there with me on the sly, but he won’t change the lease to include your name.”

“You care that much? I thought you wanted a roof over your head, not a binding document. A roof you can have if you want one.”

Trainer considered that Jackson had a good point. And leaving his name off the lease would allow Jon the luxury of hiding his exact whereabouts for a while from Francesca. Thing was, however, that although Trainer almost always found himself footing the better part of any bill that he and Jackson were supposed to share, Jackson seemed to come out better for the expense.

“We don’t. I’ll see him this afternoon to make things final. You can start moving in on Monday morning, but use the back door.”

“Son of a bitch,” thought Jon. “Am I making another mistake?”

Just then, Lydia Carson walked up the three wooden patio steps of the Club Revere. She waved a hand decorated with pale-pink nail polish in the direction of Jon and Jackson’s table. Jackson smiled. Jon drained the last few sips of his Ramos Fizz.